In case you missed it, here is Part One in this Series!

We woke up the next morning to news that around 3 am there had been another shooting in CHOP that left a 14 year old dead and a 16 year old in the hospital.  The tense situation of the night before mixed with drugs, alcohol, and weapons had turned fatal.

During my time with The Lord, He brought back to my mind the verses He had given me for this trip several days before:

Acts 4:29-31 “Now, Lord, look on their threats, and grant to Your servants that with all boldness they may speak Your word, 30 by stretching out Your hand to heal, and that signs and wonders may be done through the name of Your holy Servant Jesus.”  31 And when they had prayed, the place where they were assembled together was shaken; and they were all filled with the Holy Spirit, and they spoke the word of God with boldness.

I realized that the last thing that had happened before we left The CHOP was we were threatened.  I had been praying for boldness, and my life had been threatened.  So what was the solution?  Pray for more boldness to speak The Word and for Holy Spirit to confirm His Word with healing, signs, and wonders.

We met the sober reality of the shooting by getting into the life-giving presence of The Lord.  He refreshed us and gave us renewed determination to return to The CHOP.

As we walked into the top of the CHOP, we came upon some press reporters recording the father of the young man who was killed yelling at Rio who was on the megaphone. “You killed him” was met with “We tried to save him”.  Video footage later revealed that the two young men had been joyriding and driving erratically doing donuts in the field, where many had set up tents.  The vehicle had driven around and crashed into the barriers where it was filled with over 300 bullet holes.

A crowd had formed there so we slipped by them and headed down the hill.  We found the park where some tents were pitched on the double baseball field and people lingering all over the place.  It seemed most of the people were completely different than we had seen the night before.  We made our way over to the community kitchen where free water and coffee was served and hot meals two times a day.

It was a very crude tarp structure where the concession stand for the field had been before. Graffiti and garbage was everywhere.  Behind the community kitchen, the park went back a long way filled with tents of every shape and size. There was a community garden near the kitchen as well as many places people were sitting around, talking, playing music, and doing drugs.

After praying for several people as a group, David and I broke off the talk to a guy who was kicking a hacky sack up and down doing tricks. Taylor was not a resident of the community but came every day to exercise and see if he could find anyone to play with.  As we talked he seemed very closed and did not want prayer.  After a lengthy conversation, we found out he had a degenerative muscle disorder and literally had no biceps.  After some insistence on my part we were able to pray for him and he felt touched.

We walked around and met up with the group later and began to pray for a homeless man, Michael, who had several people try to assault him last night in his tent. They had slashed through the side of his tent threatening to kill him.  As we were praying for him and he was getting visibly touched by the presence of God, I see a man with a machete chasing someone around and break his nose.  We realized by now that every time God started doing something, the enemy tried every distraction and intimidation tactic to get us to stop.  We went over and checked on the man who had blood gushing from his nose. A self-appointed medic was assisting him in shoving tampons up his nose to stop the bleeding. Apparently he had been accused of trying to rape a female because her brother did not like him. 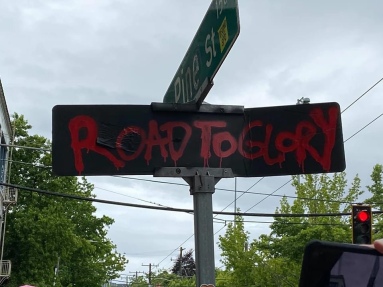 Near there, I prayed for a young man named Darryl who had sores on his feet.  He indicated they felt better when I was done.  We traveled back up the hill where we met Rio and began to talk with him.  He began to recount his version of the event that had happened the night before and how he had tried to save the young man’s life.  We noticed that there was a crew of females scrubbing blood out of his vehicle all day long.

Charlie and I both became disinterested in the political side of things and went off to find someone to pray for.  We ended up finding Rod.  He was walking with a cane and had pain in his leg and back. After praying, we took his cane and I ended up carrying it the next several hours as he hung out with us because all the pain had gone.  Aaron and I took him to one of the barriers to sit on because Holy Spirit was touching him to where he could barely stand.  He struggled to let go while the Lord did deliverance, and we continued to pray.  Finally, he was able to say, “Jesus, I give you my life.”  After that, the deliverance came and God brought joy and life to him in such a way that he asked if he could walk with us.  Some guy came up and said he should not go with us and we assured him that we were not going to kidnap him.

We walked around a while and as others continued to pray for the people that were open to it, I began to speak to Rod and encourage Him in the Lord. It was a good time to build him up as he continued to see others being healed.  At one point, he even indicated he wanted to pray for someone in a wheel chair.  He backed out at the last moment but the willingness was there.  He was holding on to a lot of anger for the hit and run accident that had injured his leg and back.  I continued to encourage him to release these things to God every time they began to arise.

We ended the day by blessing him, saying bye, and hearing of the fear that police were going to come in and take over in the evening. 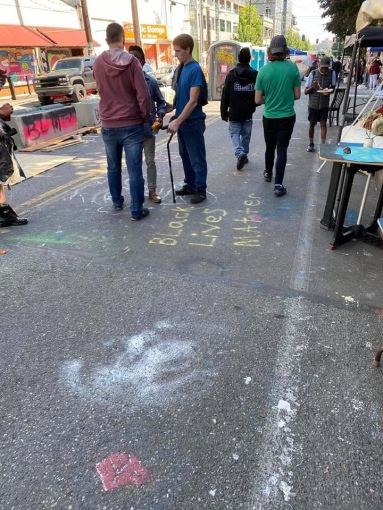 As we left, we knew the atmosphere was shifting and something in the spiritual realm was taking place.  We would not understand this more until we returned in the morning…

5 thoughts on “Chronicles of Chop/Chaz (Part 2)”