I was given the opportunity to join a group of guys headed into The CHOP/CHAZ to do ministry and evangelism.  This was a unique trip traveling to the closest thing like a war zone that the US may have seen in a long time.  This is part 1 of that adventure.

I landed in Seattle and waited in the airport for several hours for the rest of the team to arrive.  I met them at their baggage claim, and as we waited for our ride to show up, we got the opportunity to pray for a young man on crutches.  He readily allowed us to pray for him and was deeply encouraged. 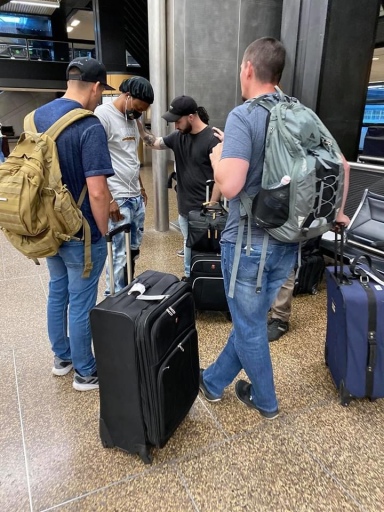 On the way back from the airport, we decided that we wanted to go into The CHOP at night. We had David as a guide who had been going in for eight to ten hours a day for over a week.  As we parked our white 15 passenger van, we did not realize that we had literally parked in what had used to be completely controlled by CHOP. The barricades had recently been moved back to consolidate their stronghold.

Heavy graffiti and boarded up storefronts surrounded us as we strolled past the barriers into the very middle of the occupied area around 10 pm. As David showed us around, a young female, with a backpack on, came running up saying, “Hey! Are you guys cops?” After denying this, she began telling us that if we were there to help to be watching out. Several women had gone missing at night or been assaulted. She said that if we see anything to report it to a vague someone. Charlie and some of the team started engaging with a young man sitting there who had dreads. Darren gave Rio a prophetic word and we were able to pray for him. We found out later, he was a head security leader and spokesman for the group.

I teamed up with David beginning a conversation with a young man named Jeff. We sat on a random couch in the middle of the street next to a dozen or more tents set up in front of the boarded up precinct. Huge concrete barriers ran the length of the streets in the middle and formed barricades that blocked the roads coming in. As we talked with Jeff, David gave him a word that allowed us to talk more about why we were there.  He welcomed us as long as we were not going to be yelling that all the people would be going to hell.  There had been several people who came through earlier that had been beaten up and/or thrown out of The CHOP for doing that. He made sure to tell us it was very safe here and there were no problems as Rio had informed us.

As we talked another young man came up and just stood next to the chair where David was sitting very awkwardly. After Jeff had to leave we asked if he wanted prayer. He was obviously very high on drugs but allowed us to pray for him. He received a touch that was evidenced by his wide toothy smile. We would see Isaiah many times later on. As I was walking with David around the zone, I quickly determined that more than 75% of the people were drunk, high or both. Pot smoke hung as a thick cloud in the air, but that was probably the least of the drugs being used.

We stumbled upon an older man Jim who David knew. His knee had been healed as David had prayed for him earlier in the week. He told us how he would walk every day through the CHOP and had already saved three women from being raped.  He wanted everything to end peacefully but was not hopeful about that prospect. While we were there, we saw the self-appointed security guards, most likely checking us out, openly brandishing AR-15’s, shotguns, and pistols.  Throughout the few days there, we saw many knives, spears, a machete, and even a lead pipe being carried by various individuals for their own security.

As we prayed and talked to people, the atmosphere became more receptive, Charlie wanted to stay longer but by 12 it seemed to be looking like a tense situation. We were warned by a guy named Garrett that all the bad stuff happens after 1, and on this particular night, everyone was more paranoid than normal that the police were going to try to take back the zone.

As we walked back toward our van, we heard a commotion and several people attacking a young man who had been breaking candles and messing up the memorial for George Floyd and others who had been killed. He was obviously trippin’ on some drugs which he told us later was marijuana laced with something bad.  We watched wondering if we should do anything as they beat him up and dragged him past our van and out of the zone before dumping him around the corner.

We were still wondering if we should go and check on him when Garrett came up and asked if our unit would be angry if we did not help him.  He asked if we were national guard and gave us the warning that was mentioned earlier.  Since it was around 12:30, we decided to go check on the guy who was beaten up and then head home.

Some of the guys went to check on him while a few others and I hung back so we did not mob him.  As this was happening a skateboarder came skating up.  He had a shirt with a pentagram was dressed all in black with a black beanie and all black hair.  An upside down cross that looked like it was self tattooed was on the side of his neck.  He came straight up and asked us what we were doing there because we looked like cops. A few choice words were thrown in for good measure, but he made sure to tell us how it is there in CHOP.  “You are not in the US anymore, you are not in Seattle anymore, you are in CHOP. There are no cops allowed and if we decide you look like cops we will kill you and nobody will be able to do anything about it.  He made sure to ask three of us directly if we understood that.  The anger and hate that filled his eyes was plain as he asked me this question.  He said, “I am not trying to come at you or nothing, but I am just trying to tell you how it is.”  He made sure to tell us not to come back or we will kill you and then left. Already on our way out, we got into the van as Charlie and David prayed for the guy who had been beaten up who was still out of his mind on drugs.

4 thoughts on “Chronicles of Chop/Chaz Part 1”