Sunday was a three-fold day of blessing and fire for me. It was not just Mother’s Day. It was not just my 28th Birthday. It was also the day that I was baptized into a new and higher realm with Jesus. It was the day where the culmination of many streams of what God has been doing in my life and with my destiny all converged into one single strand of fire unto the nations. 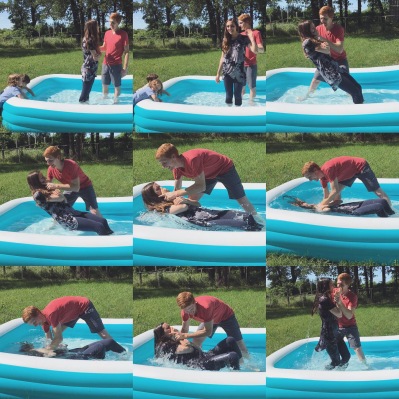 I have spent countless time over the years pondering on and seeking the Lord for my place in the Kingdom. Many things became apparent, but I was still left with many yet-to-be-answered questions. Many promises yet to be fulfilled.

If there is one thing I have been sure of with His plans for me, it was always that He created me to be a mother. Over the past few years, He began to reveal how multifaceted that call actually was.

He was not calling me to just be a physical mother to the precious children that I carried within my womb and bore. He destined me to be a mother to the orphans and those forgotten; to take up the cause of Justice for His Little Ones (both unborn and fatherless). He pre-ordained me to be a spiritual mother to a generation of Burning Ones and to love, forerun, prepare the way, contend, ascend, and to champion them into their destinies.

I understand now why I was born on Mother’s Day; why I get to celebrate that divine convergence frequently through my years.

MATTHEW 28:18-20… Jesus commissions us all to GO into ALL NATIONS and PREACH THE GOSPEL, TEACH, TRAIN, BAPTIZE, and MAKE DISCIPLES; teaching them that the Kingdom of Heaven is AT HAND. It is a gift freely received when we receive Jesus and His finished work on the cross. It is a gift we are to freely give out like a sweet love offering to The Only One Who is worthy to receive all of who we are and all we have to give. He declares that just as the Father sent Him, He is sending us!

His promise is that all authority under Heaven and on earth has been given to Him; and He has given us that very same authority because of His Holy Spirit Who dwells within us. Therefore, EVERYTHING THAT HE DID, WE CAN DO. That’s His Command, Expectation, and Promise…

Matthew 10:7-8 (TPT)
“And as you go, preach this message: ‘Heaven’s Kingdom realm is accessible, close enough to touch.’ You must continually bring healing to lepers and to those who are sick, and make it your habit to break off the demonic presence from people, and raise the dead back to life. Freely you have received the power of the Kingdom, so freely release it to others.”

After five years, the door to the nations are finally open again to me personally and the Lord has been so good to open two nations this year. In three weeks I will return to Spain for the third time and will be joining my father and mother-in-law, sister-in-law, and a small team of pastors to preach the Gospel, evangelize, train, and equip the Spaniards to do the same; all to see Spain reawakened and set on fire for the Lord. At the end of the year, I will also be joining a team to bring the Fire and Glory of the Lord to one of the most closed nations to the Gospel in South Asia.

To say that I am excited is an understatement. To be honest, part of me over the past few years began to feel a bit downtrodden in regards to not being released to GO. Our hearts are so for the nations that we would drop everything in a moment to GO if He called us. In the past five years, Jeremiah was released to go to a number of nations and the fruit of those opportunities to partner with Him in His work in the nations is overwhelming. Though I was never able to physically set foot in those nations, Jesus was so faithful to grow me as I shepherd the hearts of those of my first ministries, my children. He also pushed me to partner and sow in prayer and in prophesying His Word into those nations; and because of that and the union with my Husband, I am able to partake in the same fruit that was bore through the labor of my Husband’s hands.

Jesus revealed to me through a Heavenly encounter while Jeremiah was ministering in a Southeast Asian nation in August of last year that He was opening the nations once again and He released keys to specific nations to take for the Glory of God; and that even this year I would once again set foot in the nations. That they would never be closed to us again. I held those promises close to my heart and prophesied them forth in the secret place; and here we are.

Recently I heard Him say, “It’s necessary that my Husband baptize me on my birthday to step into the next phase of my destiny of bringing His fire to the nations. Matthew 28 on 28.” That it was to be a fresh baptism of fire to be a Mother to many nations.

After baptizing me, Jeremiah was baptized in a renewed commitment to love Jesus and partner with Him in carrying the fire of God to all nations. He loves me so well to also be baptized, to join with me in what God is doing in and through me. He loves Jesus so well to do whatever it takes to ascend higher in the upward call of God in Christ Jesus.

All of this with our boys right in it. 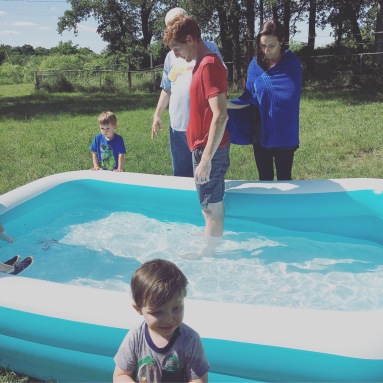 What greater legacy could we leave them, than to declare with our lives that we love Jesus with everything we are and would lay down our very lives to proclaim His name and to set nations ablaze for the Glory of God?! My sincerest prayer is that they would never forget the love offerings of that day and of our lives laid down for Jesus. That they would be further marked by the hand and fire of God to do greater things for the Kingdom of God than we ever could, and to take more nations into the Kingdom of Heaven that we could ever dream of.

We love You, Jesus. To the ends of the earth for LOVE.

My prayer through sharing all of this is that you would receive a fresh impartation of the baptism of fire of Holy Spirit and that you would begin to see the nations with a renewed vision, through His eyes of love, compassion, and that He would sear nations on your heart.

Being called to GO isn’t just for our family; it is for every soul. It is not His Great Suggestion, but His Great Command; His Great Commission. He desires every person to co-labor with Him and co-mission with Him to set the nations ablaze and to bring Him the reward of His suffering!

Let’s step up, step out, unafraid and unashamed; and not let another soul perish while we can do something about it! We have the very Spirit of God abiding within us and therefore, all authority over every power of hell is within us; all power over every principality is contained within this earthen vessel. May we surrender everything to laying down our very lives for this one thing: that Jesus may be glorified among the nations.

Matthew 10:7-8
(AMP)
“Jesus came up and said to them, ‘All authority (all power of absolute rule) in heaven and on earth has been given to Me. Go therefore and make disciples of all the nations [help the people to learn of Me, believe in Me, and obey My words], baptizing them in the name of the Father and of the Son and of the Holy Spirit, teaching them to observe everything that I have commanded you; and lo, I am with you always [remaining with you perpetually—regardless of circumstance, and on every occasion], even to the end of the age.'”

(TPT)
“Then Jesus came close to them and said, ‘All the authority of the universe has been given to Me. Now go in my authority and make disciples of all nations, baptizing them in the name of the Father, the Son, and the Holy Spirit. And teach them to faithfully follow all that I have commanded you. And never forget that I am with you every day, even to the completion of this age.'”