Emerging from our shelter we were greeted with an unfamiliar sight.  Trees as large as houses were strewn everywhere. Branches and leaves had been stripped from the trees and scattered on every inch of the ground.  With the welcome morning light, this is what our eyes came upon.  A new world lay before us, somehow similar to the old, but oh so different. 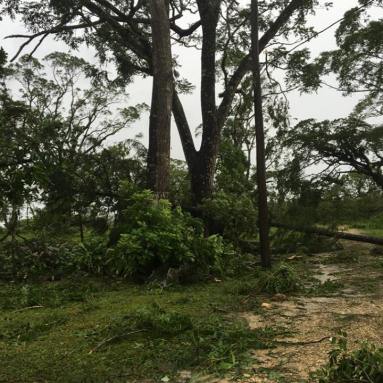 Some of us got to work cleaning up immediately and others went off to sleep in their beds and make sure their rooms were not torn apart.  We had a lot of things get wet in our room and some leaves had blown in, but besides that not much trouble.  The power being out is inconvenient for a lot of people, but just another effect of the storm. We worked all morning to pile branches and leaves. Sometime during the night, Santi had forgotten to move his vehicle to a safe place and it had been partially crushed by a monstrous tree.  The highlight of the morning was when we were finally able to get the tree off the truck and see that it was dented and had some broken windows but was still usable. 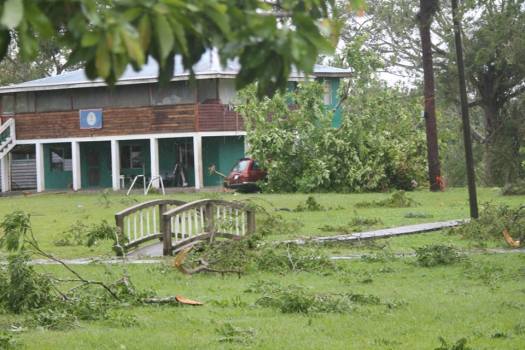 Our next task was to clear the downed power lines so that we could get them repaired. Along, the way, we repaired the horse pen while many continued to stack the seemingly endless supply of broken branches and downed trees.  By lunch, most were exhausted and I had to sleep for a few hours.  After a quick nap, I got back to work until dinner when I found out that Sarah was apparently suffering from heat exhaustion and lack of sleep.  I know she worked just as hard as, if not harder than, the majority of the guys and never took a break for water or anything.  She was paying for it. Heidi and I went and prayed for her, and we saw an immediate improvement.  We sat around for about an hour around a candle talking and finally turned in for the night.  This has become a rather interesting real mission trip that most people were unprepared for. 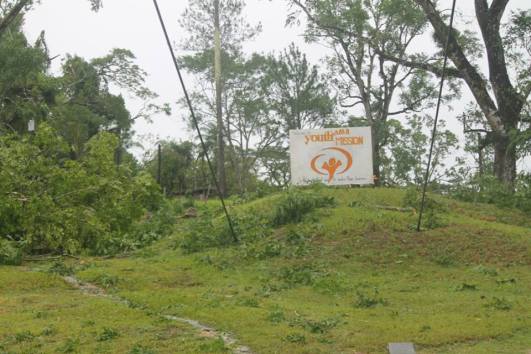 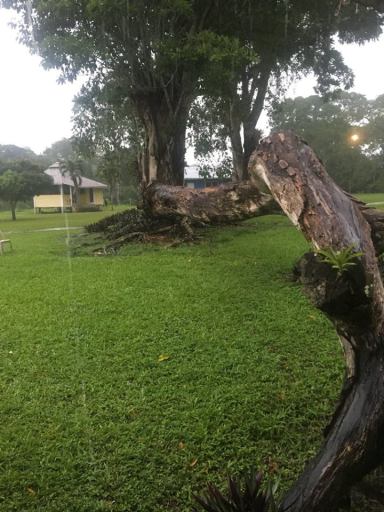 Interestingly, a day or two before I left for Belize, God had spoken something to me during my prayer time.  I was praying and preparing spiritually for the trip and got a strange impression.  It was not even what I would call a word, but I felt as if this mission would be more than what we knew or expected and that we may not come back when we planned on it.  I know now that it was God, but then I had this feeling that this trip was going to be bigger than anyone expected and that something was going to happen that no one planned on or prepared for.  Like I said, it was not clear enough for me to tell the leaders, but it was this nagging thought.  I was unsure of what to expect or if I was just being silly, but I made plans in the physical to have everything taken care of in case I did not come back when I thought I would.

Now, I know that was a word from the Lord.  I doubt any of us would have gone if we had known that we would be in the middle of a hurricane.  However, God was preparing me even before the trip for unexpected things that would take place.  Even on my 28th mission trip, God is still giving me adventure and allowing me to experience something I had never done before and may never do again, endure through a hurricane. 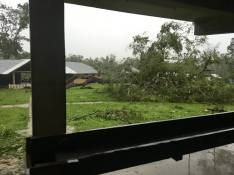 These are difficult times that we all live in.  God has chosen you to live at this time and He gives you everything that you need to succeed.  The more troubling things that are around you, the closer you need to get to Him!
Press into Him and He will give you the ability to press on no matter the lack of sleep, uncomfortable conditions, pain, or whatever you may be going through.
Interestingly, God revealed to me something that I never really could have known or been prepared for, experiencing a hurricane, during my time with Him.  I was close to Him even before the hard times came, and because of this, He was able to prepare me for the unknown hard times to come so that I was ready to endure when the time came.  This demonstrates how important it is to press into Him during the easy times as well as the difficult.

Challenge –
Today, ask God to help you to come closer to Him than ever before.  As you do this, look for the encouragement, strength, and life that will come as a result of deepening devotion and intimacy with Him!!!
Jeremiah, Man on Fire!!!