As we have been here, it is clear that the spiritual significance of this country is greater than we first imagined.  It is ingrained into everything here, even down to the Scottish flag.  It’s creation and symbolism has great spiritual meaning and was the image of victory in the past.  It is in the shape of Christian Apostle and martyr, St. Andrew’s cross symbolizing his crucifixion upon an x-shaped cross.  Legend has it that in 832, Óengus II led an army to battle and on the eve of the battle, he was engaged in prayer and vowed that if granted victory, he would appoint St. Andrew as the Patron Saint of Scotland.  Andrew then appeared to him in a dream and assured victory.  On the morning of the battle, white clouds forming an X shape in the sky were said to have appeared.  Upon seeing this, Óengus and his men took the field and despite being inferior in numbers, were victorious.

Currently, we are staying in Stirling, Scotland and there are mounds of historical and spiritual significance here.  Stirling was once the capital of Scotland but is interestingly enough, one of Scotland’s smallest towns.  King James VI of Scotland who became King James I of England was crowned at The Church of the Holy Rude here in Stirling,  he was baptized at Stirling Castle and his name may be familiar to you because the King James Bible written in 1611 bears his name. 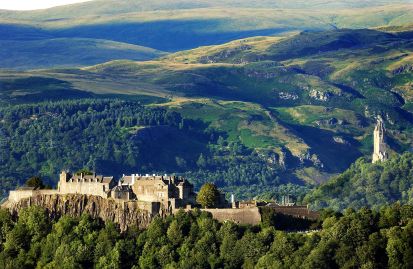 Because of its strategic position and placement, it historically was always being attacked or invaded with intention of takeover.  Stirling Castle was one of the largest and most important castles because it was the last castle remaining in Scottish hands.  It underwent at least eight sieges with the English during the Wars of Scottish Independence, including one of the most well known, the Battle of Stirling Bridge with William Wallace (as seen in the movie, Braveheart.)  Stirling is the “Gateway to the Highlands” and part of what is called the Central Belt of Scotland, which includes Glasgow, Stirling and Edinburgh.  Stirling is known as the belt buckle and William Wallace said, “He who holds Stirling holds Scotland.”

Wow!  Just as significant as it was to hold Stirling and to keep it from being taken over by invading armies in the early years, it is equally as important now.  Once an invading army was able to capture Stirling, they had easy access to all of Scotland.  Upon visiting the Stirling Castle and learning of its history and the lives that were given to keep Stirling in Scottish hands, I realized that this same battle is taking place today.  Perhaps not quite the same with gaining power over the land physically, but spiritually.  It is said that Scotland is the “Gateway to Europe.” You can reach the countries of Europe easily from Scotland and this I believe, is a prophetic word.  It also explains the vision of light missiles that the Lord gave me in prayer for Scotland as well as another man which can be found in my previous post, Lighthouse of Life.

There is an openness here and God is being invited in through so many different people and He is doing crazy things.  Being able to partake in many different ministries here in Stirling, I have no doubt of that or that Stirling has a big part in this move.  “He who holds Stirling holds Scotland.”  All it takes is God’s people coming together in unity and contending for this to occur. Oswald Chambers said, “Prayer does not prepare us for the greater work, prayer IS the greater work.”  A Scottish man told us at a cafe church that a missionary years ago said the Lord gave him the message that, “Strangers will come and build your walls”, in regards to Scotland.  Isaiah 58 compares true and false worship and true fasting that heals, frees, loves, restores, serves. Verse 12 says, “Some of you will rebuild the deserted ruins of your cities.  Then you will be known as a rebuilder of walls and a restorer of homes.”  Isaiah 60 is talking about revival and verse 10 states, “Foreigners will rebuild your walls…”  God has revealed this as a promise over Scotland.

A battle wages today for souls.  The enemy will do whatever he can to divide and conquer and he will steal, kill and destroy whatever he can get his hands on in the process.  Is there any area of breach in your life? Is there any offense that has been allowed to take root and birth bitterness, anger, unforgiveness?  Romans 16:20 says, “The God of peace will soon crush Satan under YOUR feet.”  If there is, I encourage you to hand it over to God and through His power, crush the enemy!!!  The victory is freely yours through Jesus!  Take hold of your triumph today!!!